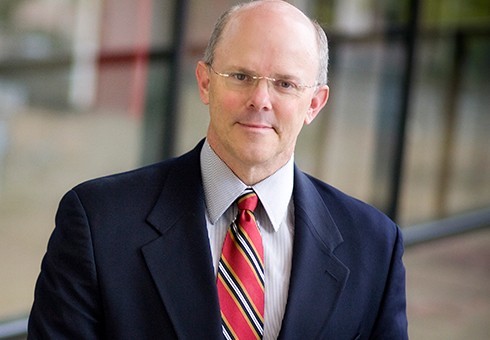 George C. Bruce was born in Wichita, attended Wichita Public schools and graduated from Wichita Southeast in 1973.  He received a BA degree in history from the University of Kansas in 1977, where he a was a member of the Beta Theta Pi fraternity.  He received his Juris Doctorate Degree from Washburn University in 1980.  During his time at Washburn he worked in the Kansas House of Representatives and clerked for Attorney General Robert T. Stephen.

Shortly after his graduation from Washburn, Bruce practiced law with Hall, Pike and Bruce in Wichita, and has practiced with Martin, Pringle, Oliver, Wallace & Bauer, LLP since 1989, where he served the firm as Managing Partner in 1996 and 1997.

His legal practice focuses on banking; business mergers, acquisitions, and re-organizations; traditional and alternative energy; finance and private placements; real estate; senior housing; and international matters.  In his international practice he has represented clients in litigation and business transactions in over 25 countries.

In addition to the practice of law, George serves as Chairman of the Board and CEO of Aladdin Petroleum Company, where he has been active in domestic oil and gas exploration and production in Kansas, Oklahoma, Texas, Idaho, Kentucky, New Mexico and Colorado as well as, Western Canada, West Africa and the Caribbean. He serves as Vice Chairman and general counsel of Aladdin Middle-East, Ltd, a petroleum exploration, production and drilling company with activities in Eastern Europe, the Mediterranean, the Middle East, and the Republic of Turkey.  George also serves on the Board of Directors of CrossFirst BankShares, Inc, a bank holding company, based in Kansas City and is a Ruling Elder at Heartland Community Church of Wichita.

George has vast experience and a well-deserved reputation as an accomplished business lawyer and businessman. Whether working in the finance industry, the energy field, or with the corporate ownership of retirement communities, George brings years of wisdom, a keen intellect, and an innovative, business-minded approach to the table. He ably spearheads projects, including mergers and acquisitions, raising capital, negotiating and financing sales and acquisitions, and other business, energy, or finance-related transactions.

Both of George’s grandfathers and his father were intimately involved in the oil business. His son, Michael Bruce, is a principal of Manifest Energy, LLC, one of the most progressive players in the renewable energy landscape. George, too, is a recognized authority in the energy business and energy law. He is knowledgeable concerning not only oil and gas but also bio-fuels and renewable energy resources, such as solar, wind, and geo-thermal energy. George has actively been involved in international business deals in 26 countries, most of them energy-related transactions.