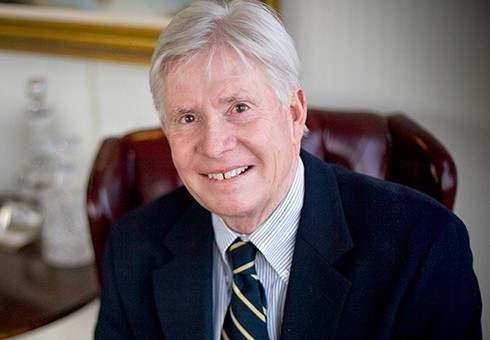 Tom Hamill grew up in a family of seven children with a father who was an independent business owner. This environment fostered Tom’s independent streak and gave him an appreciation for the risks and benefits associated with entrepreneurial endeavors. Tom’s law practice has focused on business owners – whether representing them in commercial litigation or assisting in their professional and personal succession planning needs. Tom’s father was his first, and to date most challenging. business client. As he did when representing his father’s company, Tom welcomes the opportunity to employ creativity and plain old hard work to meet the needs of the business community.

Tom began his legal career in a small firm in western Kansas. He served briefly as an officer in the Trust Department of Commerce Bank of Kansas City. Thereafter he became an Assistant United States Attorney in Kansas City, where he tried many civil and criminal cases over the next four years. In the mid 1970s, he founded his own firm and began to build his commercial/business practice. In 1996, Tom and Scott Tschudy opened the Martin Pringle office in Overland Park, Kansas. He is admitted to practice law in both Kansas and Missouri.

During his legal career, Tom has been active in numerous professional associations. He is Past President of the Johnson County Bar Association, the Johnson County Bar Foundation, and the Kansas Bar Association. He was a member of the American Bar Association House of Delegates for 17 years, serving as the Kansas Delegate to the House, and a member of the Nominating Committee of the House of Delegates. Additionally, Tom served on the Board of Governors for the American Bar Association from 2011 - 2017, also serving on the Finance Committee and the Investment Sub-committee. Tom also served as Chairman of the Board of Trustees of the Kansas Public Employees Retirement System for nearly four years.

Tom loves to play golf, listen to classical music, play with his grandchildren, and spend time with his wife………not necessarily in that order.

Tom has more than 35 years of experience handling commercial litigation. He is a formidable advocate and trusted advisor in both complex and routine matters. Tom’s clients trust him with their commercial disputes, whether the matter is played out in the courtroom, before an arbitration panel, in mediation, or in negotiations with other businesses or their counsel. Tom is also a respected mediator and arbitrator. He has been a member of the American Arbitration Association's Commercial Panel for over twenty-five years, and is also invited to serve as a mediator or arbitrator in many private cases.

Tom serves as general counsel for numerous medium and small businesses. In this capacity, he handles all of their transactional matters, and also guides his clients through business succession and estate planning, represents them in commercial negotiations, and serves as trial counsel in civil and commercial litigation.

Additionally, Tom has more than 20 years' experience representing business start-ups. He provides sound legal advice to both small and medium-sized clients. Tom is well-qualified to address a range of legal issues, including mergers, acquisitions, intellectual property, employment, contract negotiations, and dispute resolution techniques, that can provide business owners with the advantage needed to be successful in today's environment.